Res Militaris is a bilingual (English, French), peer-reviewed, on-line social science journal dedicated to the study of Multidisciplinary issues. it is Multidisciplinary journal. It pursues a threefold objective : provide an independent publication outlet and forum for a growing European scholarly input in the military field ; stimulate intellectual exchange and international (notably transatlantic) debate ; bring some linguistic/cultural balance to an area of study hitherto dominated by English-language publications.
Some fifty international (mainly European and North American) defence scholars have accepted to serve on its editorial board for peer-review purposes. A group of prestigious senior figures – academics, officers, journalists – forms its patronage committee.
The journal originally (2010-2013) appeared at the pace of three issues a year, in Autumn, Winter-Spring and Summer. From volume 4 (2014) onwards, its periodicity of publication has shifted to two issues yearly, in Winter-Spring and Summer-Autumn.
Interdisciplinary in character, it carries material conceived from the perspectives of sociology, political science, anthropology, psychology, geography, history, economics, law and management. It adopts a broad definition of the term “military”, to include all aspects of the nature, roles, organization, actual or potential use of armed force, and its internal or external consequences. Just as much as war studies, it considers internal security, conflict resolution and peace research to be part of the province it intends to cover. It welcomes empirical, analytic, comparative and theoretical approaches alike. As becomes a serious academic journal, Res Militaris is pluralist in value-orientation.
The review is concerned with the two facets of military force and institutions, functional and sociopolitical, as well as with that substantive area’s four levels of analysis: international (context, role, management, and outcomes of the uses of force, internationalization of security), national (political-military nexus, armed forces and society), meso– (organization and profession), and micro-analytical (individuals and small groups).
Examples of substantive interests include:
Res Militaris carries articles, book reviews, and a regular section devoted to classics in the political-military field. Intellectual communication and debate will be stimulated by systematically providing articles with abstracts in both languages, and by encouraging book reviews as well as perspectives on classics in French when the original is in English, and vice versa — whenever possible. The journal is committed to a policy of rough linguistic parity.
The journal’s core target audience is made up of academic researchers, post-graduate students, working professionals (officers, civil servants, journalists), and practitioners in governments, parties, associations and international organizations. More generally, it intends to cater for that segment of the informed public who are interested in contemporary defence/security issues and the contribution of social science analyses to their study. 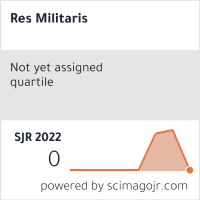